When people think of military haircuts you might think of a buzz cut. All branches of the military require that men keep short hair. But there are more hair styles that men can wear than just the buzz cut, although that is a common style. 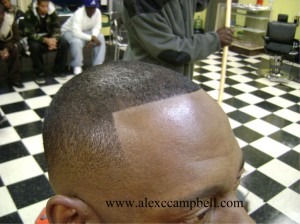 Once a recruit leaves boot camp there are other short haircuts that they can choose. In general the requirements that the military branches have for men’s haircuts are similar, although the Marines have a slightly stricter code.

The general regulations for military haircuts are that hair must be kept neat. 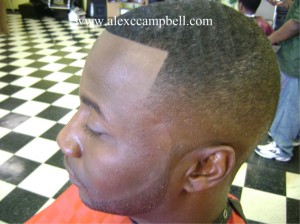 It must not touch the collar in the back. The hair around the neck and ears should be tapered from the hairline at the bottom of the neck to blend with the hair at the top of the head. The hair should be able to be covered by the head gear. Hair length should not be over 3 inches, nor can it be in any style that means it is over 2 inches tall from the scalp.

The Marine guidelines don’t allow for anything that leaves for large bald areas like horseshoe flattops or Mohawks. There are several styles fall within these guidelines. The most common haircut found within the Marines, and in the specialty groups of other branches like the Rangers and the SEALs, is the high and tight. 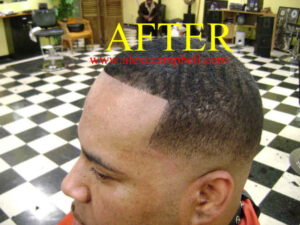 The look that is achieved by the high and tight is that the hair has been pulled up to the top of the head very tightly. The hair on the sides and the back is cut very short, almost shaved, so that the scalp shows through, but isn’t completely bare.

The top of the hair is cut short enough to stand straight up. There are so many variations of military haircuts, such as leaving the hair to taper at the top. When Hollywood makes movies about the military this is actually the most common of the short haircuts that they use.

Another common haircut that gets used in the military is the crew cut. Most boys at some point has had a haircut like this. It is very close to what new recruits use. The main difference is that it’s done with an electric trimmer and not shaved down. However, the hair is cut very close head, so that there is just a short layer of hair. It’s short enough that the scalp shows through.

There are many other styles of short haircuts that men in the military wear, but these are the the ones that are most common. Cuts like the Caesar, the Butch, the flattop and the high regulation are also common styles. The one thing that all these styles have in common is that they are very short on the sides and back and taper to the top.