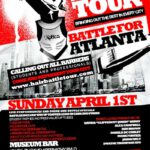 The team xotics 10 city hair battle tour is making moves all over the country. Curtis Smith had a vision a few years ago and has taken his vision across the country and eventually worldwide. Here is a list of the Hair Battle Tour times and locations.

Be on the lookout for a hair battle tour near you. If you are a barber and you think you have the skills to compete on a national level, then make sure you go to a hair battle tour and sign up for the biggest barber battle competition the world has ever seen.

There will be barbers from all over the country. Some of the biggest names in the barber business like Alex Campbell, Curtis Smith, Dan Brown, Jessie Lima, DC the Barber, Eric Pacino, and many more.

So even if you are not a barber, just to be able to come out and witness the biggest barber movement in history will allow you to have a totally new perspective of the barber industry.